Part of the series: How to research stuff.

Today I join Razib Khan’s quest to get bloggers to use the General Social Survey (GSS) more often.

The GSS is a huge collection of data on the demographics and attitudes of non-institutional adults (18+) living in the US. 1 The data were collected by NORC via face-to-face, 90-minute interviews in randomly selected households, every year (almost) from 1972–1994, and every other year since then.

You can download the data and analyze it in R or SPSS or whatever, but the data can also be analyzed very easily via two easy-to-use web interfaces: the UC Berkeley SDA site and the GSS Data Explorer. 2

Suppose you come across the claim that Americans have become less religious over time. Is that true? 3 This is precisely the kind of thing the GSS surveys people about, so let’s look up the data on the Berkeley SDA site:

First, we want to find a variable that captures religiosity, or religious attendance, or belief in God, or something like that. Click the Search button near the top, and we see this:

The search field works basically like you’d expect, but click Search Techniques Help if you want to check the allowed operators and syntax. Let’s search for God OR religion OR religiosity OR "religious attendance": 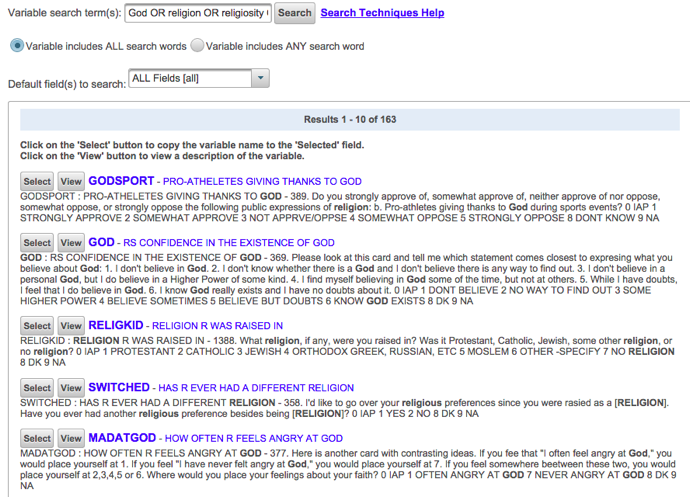 After scrolling through several pages of results, some of the most promising variables for this purpose appear to be:

These are my own short paraphrases of the questions asked of each R. Click VIEW next to a variable name to see the variable’s actual details: 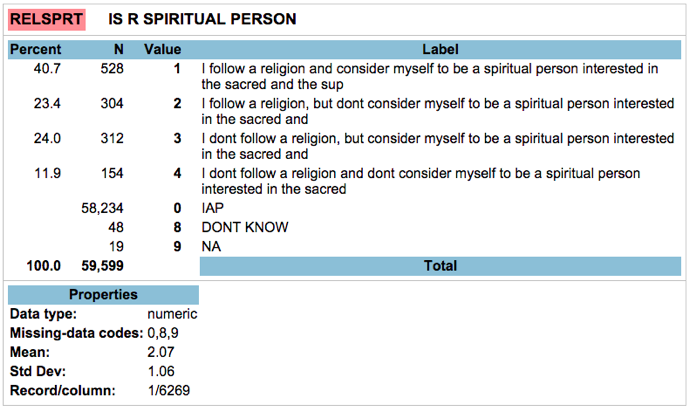 You’ll notice that some of the details here are missing. For example some of the allowed answers are truncated, and there’s no information on which years this question was asked. For that you’ll want to download the latest GSS Codebook (47mb PDF). Search it for VAR: RELSPRT and you’ll find the variable details:

Now we can see the non-truncated allowed answers. We can also see that, unfortunately, RELSPRT was only collected during 2008.

This is one place where the GSS Data Explorer comes in handy. It’s a slower site in my experience, and it shows less information on each variable than the Berkeley SDA site does, but search for God | religion | religiosity | "religious attendance" (the | is used for OR on this site) and you’ll notice a handy feature: 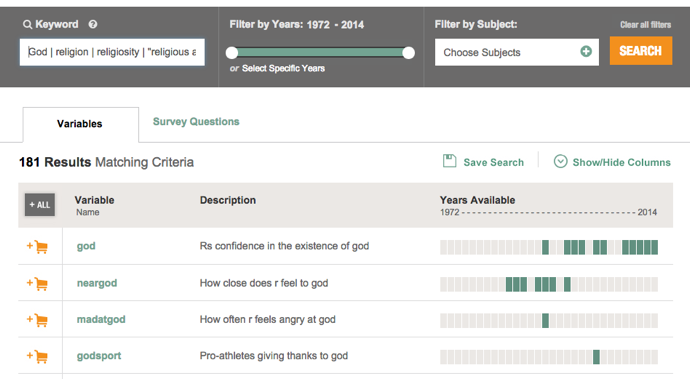 It shows you right away the available years of data for each variable!

Luckily, two highly relevant variables stand out as being available for all years:

We’ll do the analysis of RELIG at the Berkeley SDA site because it’s quicker. But first, let’s make sure we understand our variable. Search the Codebook PDF for VAR: RELIG and you’ll see:

Okay, good: there’s nothing weird to watch out for here. Respondents were asked a follow-up question if they responded with Protestant or Other, but we don’t need to concern ourselves with such details.

Click Analysis on the Berkeley SDA site and set Row to RELIG and Column to YEAR:

Click Run the Table and you’ll get a page with, among others things, a huge table:

Glancing over the table quickly, we can see that:

Unfortunately, the default visualization, a stacked bar chart, is hard to read with so many variables: 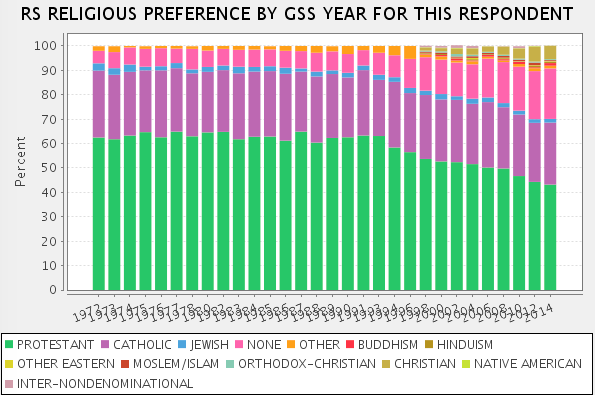 Back at the Analysis page, change Row to this: 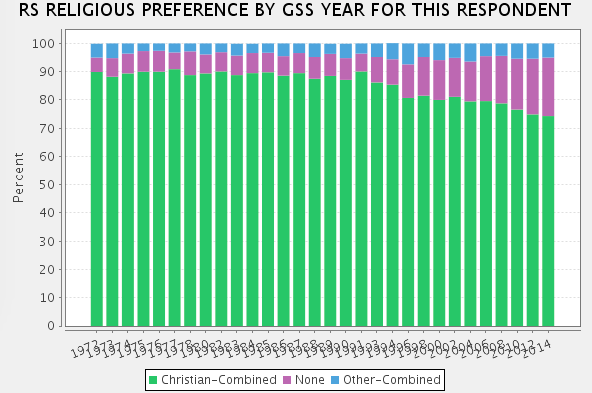 Okay, so, there’s a clear downward trend in American religiosity since about 1993, but Americans are still very religious, and in particular they are very Christian.

To make things even simpler, we could also combine Christian-Combined and Other-Combined into a new variable called Religious, and change None to Non-Religious. To do this, change Row to

and run it again. Now we get: 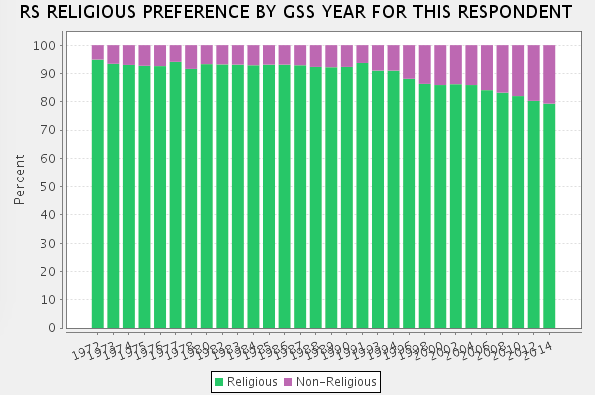 Our second analysis: degree of fundamentalism

But there is another sense of “religiosity over time” we can explore, using that FUND variable we found earlier. Let’s check what the GSS Codebook says, by searching it for VAR: FUND:

Ah, good thing we checked! The REMARKS section says we should look at GSS Methodological Reports 43 and 56. You can find them on the NORC website here, by clicking Next until you reach MR043 and MR056.

MR043 explains that FUND isn’t measured by asking R a question, as with RELIG. Instead, FUND is automatically calculated based on the rules from Appendix 2 of MR043. For example:

And so on. Most of MR043 explains how those assignments in Appendix 2 were made.

At a glance, it looks like the appendix of MR056 may contain information on how to recode FUND so that a time series analysis isn’t corrupted by the new 1984 subdivisions, but that’s probably more effort than this eyeball analysis is worth. To be safe, we’ll just leave out the pre-1985 data. Set Row to FUND and Column to YEAR(1985-2014) and run the table: 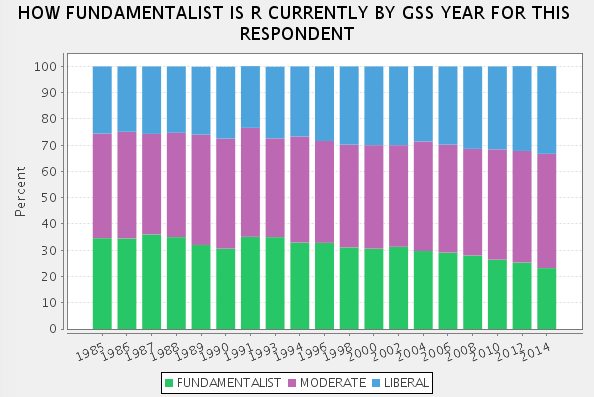 Looking at the table and the stacked bar chart, it seems that since 1985:

Remember, those who say they prefer no religion are among those labeled Liberal. What happens if we look at trends in fundamentalism among religious Americans only? To do this, we’ll have to add a selection filter that excludes Rs who said their religious preference (RELIG) was None, like this: 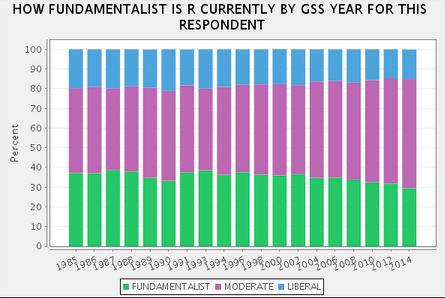 All we’ve done here is generate some time series and eyeball some tables and stacked bar charts. Obviously we can do a lot more with the GSS than this, but hopefully this is enough to give you a sense of how the GSS works and what online tools are out there for analyzing the data. I plan to write more GSS tutorials later.