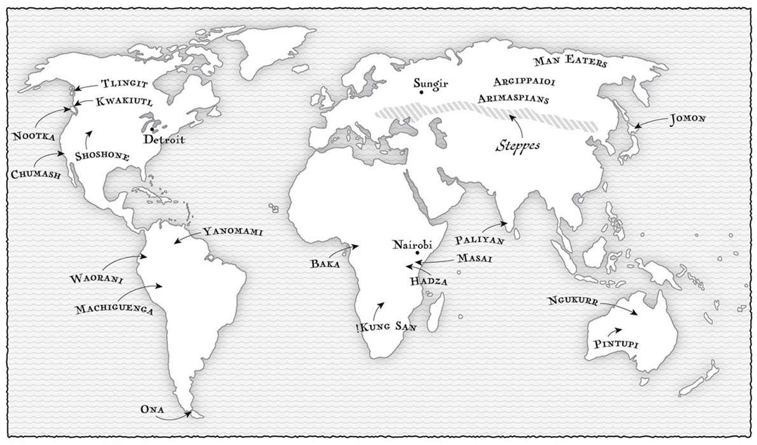 Why is Detroit the only city mentioned on a map otherwise dedicated to groups of hunter-gatherers? Is Ian Morris making a joke about Detroit being a neo-primitivist hellscape of poverty and violence?

No, of course not.

Figure 2.1. is just a map of all the locations and social groups mentioned in chapter 2, and it just so happens that Detroit is the only city mentioned. Here’s the context:

Forager bands vary in their use of violence, as they vary in almost everything, but it took anthropologists a long time to realize how rough hunter-gatherers could be. This was not because the ethnographers all got lucky and visited peculiarly peaceful foraging folk, but because the social scale imposed by foraging is so small that even high rates of murder are difficult for outsiders to detect. If a band with a dozen members has a 10 percent rate of violent death, it will suffer roughly one homicide every twenty-five years; and since anthropologists rarely stay in the field for even twenty-five months, they will witness very few violent deaths. It was this demographic reality that led Elizabeth Marshall Thomas to title her sensitive 1959 ethnography of the !Kung The Gentle People — even though their murder rate was much the same as what Detroit would endure at the peak of its crack cocaine epidemic.

Okay, well… I guess that’s sort of like using Detroit as an example of a neo-primitivist hellscape of poverty and violence.

… and in case you think it’s mean of me to pick on Detroit, I’ll mention in my defense that I thought the first season of Silicon Valley was hilarious (I live in the Bay Area), and my girlfriend decided she couldn’t watch it because it was too painfully realistic.