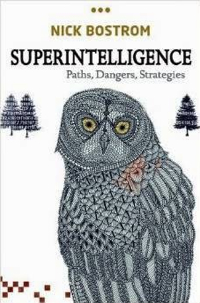 Nick Bostrom’s new book — Superintelligence: Paths, Dangers, Strategies — was published today in the UK by Oxford University Press. It opens with a fable about some sparrows and an owl:

It was the nest-building season, but after days of long hard work, the sparrows sat in the evening glow, relaxing and chirping away.

“We are all so small and weak. Imagine how easy life would be if we had an owl who could help us build our nests!”

“Yes!” said another. “And we could use it to look after our elderly and our young.”

“It could give us advice and keep an eye out for the neighborhood cat,” added a third.

Then Pastus, the elder-bird, spoke: “Let us send out scouts in all directions and try to find an abandoned owlet somewhere, or maybe an egg. A crow chick might also do, or a baby weasel. This could be the best thing that ever happened to us, at least since the opening of the Pavilion of Unlimited Grain in yonder backyard.”

The flock was exhilarated, and sparrows everywhere started chirping at the top of their lungs.

Only Scronkfinkle, a one-eyed sparrow with a fretful temperament, was unconvinced of the wisdom of the endeavor. Quoth he: “This will surely be our undoing. Should we not give some thought to the art of owl-domestication and owl-taming first, before we bring such a creature into our midst?”

Replied Pastus: “Taming an owl sounds like an exceedingly difficult thing to do. It will be difficult enough to find an owl egg. So let us start there. After we have succeeded in raising an owl, then we can think about taking on this other challenge.”

“There is a flaw in that plan!” squeaked Scronkfinkle; but his protests were in vain as the flock had already lifted off to start implementing the directives set out by Pastus.

Just two or three sparrows remained behind. Together they began to try to work out how owls might be tamed or domesticated. They soon realized that Pastus had been right: this was an exceedingly difficult challenge, especially in the absence of an actual owl to practice on. Nevertheless they pressed on as best they could, constantly fearing that the flock might return with an owl egg before a solution to the control problem had been found.

It is not known how the story ends, but the author dedicates this book to Scronkfinkle and his followers.

For some ideas of what Scronkfinkle and his friends can work on before the others return with an owl egg, see here and here.